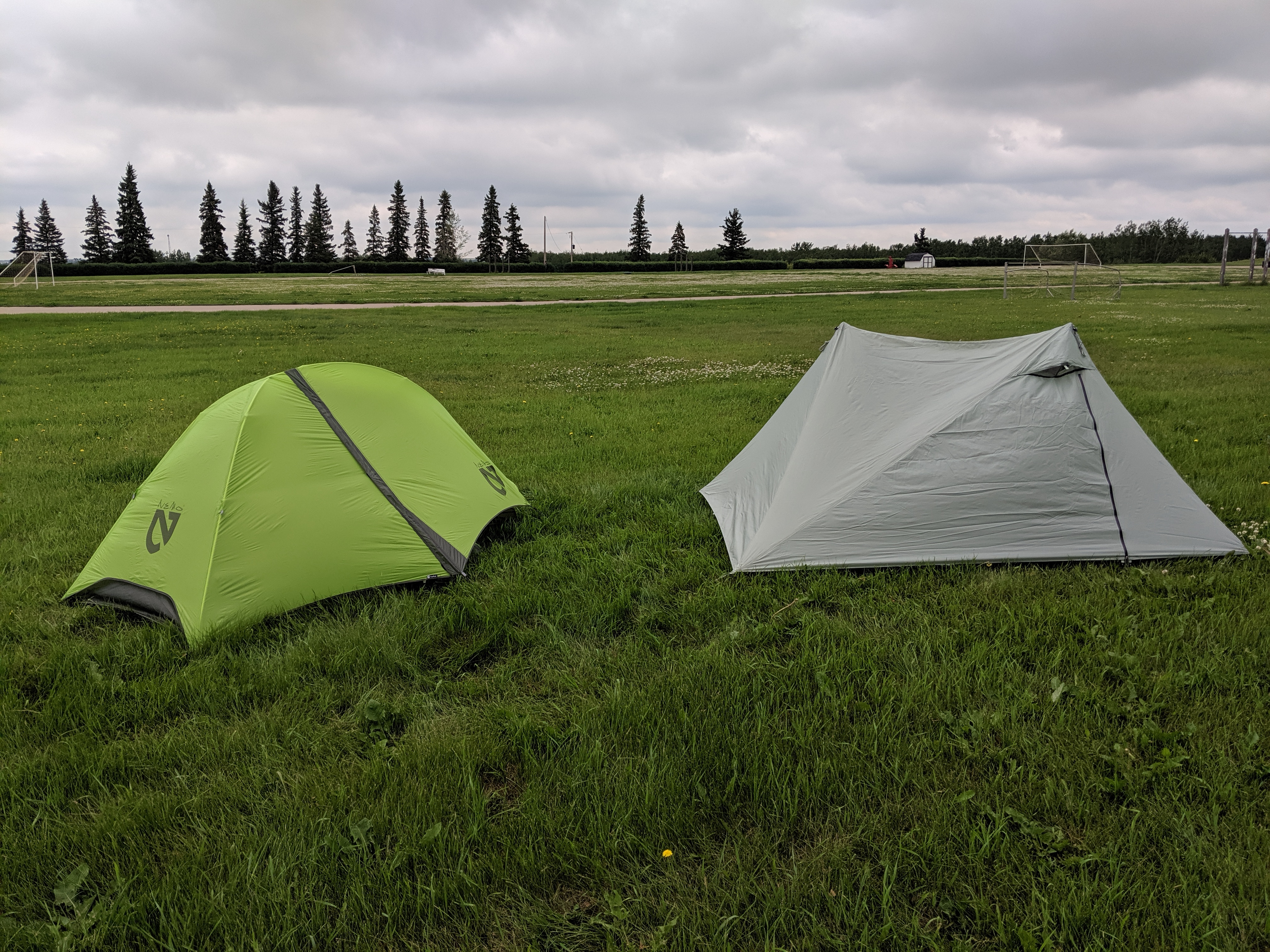 So I was working on my gear as you might have seen on here, and I settled, after much debate on the Nemo Hornet 1P, after I found a screaming hot deal with Valhalla Pure, getting the tent for $359 instead of $449. I discovered its footprint size and price per ounce was more favourable than just about anything I could order in from across the border like Gossamer Gear or Zpacks.

So I grabbed it on sale…

I would always rather support Canadian-based design than USA – the market is so much smaller and the guy designed it for the Great Divide Trail, a trail I desperately want to do. I looked it over online and I loved the double vestibule and neat innovations like the parallelogram floor. No poles means lighter right?

I signed up for the drop thinking it would be a while before it came available again. Then it did – sooner than I thought.

Now I have two tents. What to do? Compare them of course!

By spec, the price is more expensive for the Nemo (unless it’s on sale like I got mine). The weight title goes to the XMid, but only by 60 grams which is like 4 tablespoons of sugar. Floor size goes to the Nemo, at 22 square feet compared to the Xmid’s 16.8 (though when I actually tried them out… read on for more).

I set up the XMid quite quickly though the fly and floor were separated and I had to puzzle for a second to see how they linked together. I also spent a few moments figuring out how to even out the sizes through adjusting pole heights and such. I ended up using all 8 pegs included, though I have seen claims you don’t need them all.

The material the tent is made with feels strong and light, and the build quality looks good. I didn’t notice any flaws in manufacture. The pegs are simple, titanium and serviceable, and light (shaped like a shepherd’s crook). Once assembled, I was really impressed with the vestibule sizes and the spacious feeling on the inside. I laid out my Klymit Static V UL pad and Eureka bag to see how they would fit and no problems, with room to spare – I am 6’1″ and I had at least a couple inches top and bottom laying on my back. I also noticed the large ceiling storage sleeve – that would hold a lot of junk.

Once it was up it seemed very sturdy. I set it up in a 20km/h wind, and it went up fairly easily. With a little more practice I expect it would become much easier. I really liked this tent.

Then I went to the Nemo. You can tell Nemo has been in the biz for a long time – everything in this package spoke quality. The pegs were tough, like what you would buy aftermarket. The poles were feather light – they would have to be, as this tent is only 60g lighter than the poleless XMid! It uses a three pole design that feels more than adequate, since it’s only a 1 person tent.

Everything in the setup process was obvious. The hangers for the netting to the poles were innovative and easy to use. The clips at the corners connected the fly to the corners of the inners using a nifty system. It all went up with only 5 pegs – one for the fly to be tented out into a vestibule on one side. The vestibule was smaller than either of the XMid’s, but it was still adequate.

The materials this tent are made of feel like something out of science fiction. They felt like silk, only lighter. They were so much lighter than the XMid’s material I found myself questioning how durable they could be – but Nemo has a stellar reputation so I have to think this is just what top-of-the-line feels like. If the XMid had utilized this material it probably would have shaved off another 60-100g, just because the fly is so much larger on the XMid.

The interior felt satisfyingly roomy. There was a small transparent pocket at the peak for a headlamp to be stashed and a wall pocket for other miscellanea. Not quite as much storage as the XMid.

After setting up, laying in and tearing down these two tents side by side and in identical conditions, this I will say: both are excellent tents and I want to keep them both. However, my wife does not want me hoarding gear so I have to pick one to keep and one to sell. And my decision is: I’m going to keep the Nemo.

As I said, I love supporting Canadian, and a thru-hiker like Dan deserves the business. However, for my needs, Nemo scratches all my itches. Because it only costs me 60 grams, the benefits of a poled design which would be easier to manipulate in the field should I need to move its site, and the ability to skip the trekking poles if I wanted to, the adequate vestibule big enough for my pack no problem, and the roominess of the interior, I simply think it will do the trick in more situations.

However, you are not me. Consider the XMid for these reasons:

I originally wrote this review in 2019, and a number of details have changed since then. Last summer I actually had both tents out on Section B of the GDT – a good friend borrowed the Nemo and I used the XMid. I saw the difference in how the materials responded to dew, and the Nemo was soggy every single morning, with the fly often touching the mesh beneath, from the moisture causing stretch in the fabric. On the other hand, I never had problems like that with the XMid, due to its use of polyester materials. No stretch, little water retention.

Additionally, I got a dog. As such, the XMid is definitely my preferred tent now. If you are interested in obtaining one, the good news is Drop now sells them through Amazon, though availability is sporadic. DurstonGear also now sells 2p versions, if you would like more room within the bugnet, at a weight penalty.

Last note: the 1p has actually been updated. There are a number of tweaks made to it that improve upon the original design. A great resource for finding out more about Dan Durston’s products is this Facebook group.