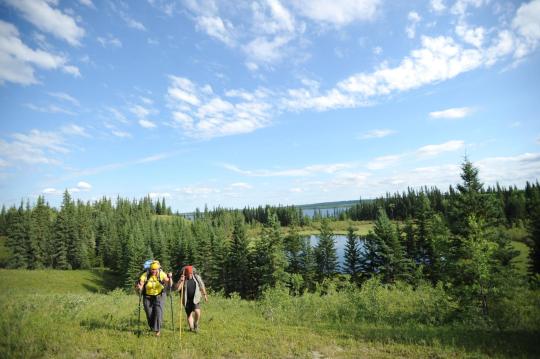 Planning a Hike on the Boreal Trail

Living 6 hours’ drive from the Rockies, I am glad they are so close but they aren’t close enough to “practice” on. I love hiking in the Rockies, but the problem of preparation is real out on the flatlands.

Thankfully, locally it is moderately hilly. When I go out in my local provincial park trails, Total elevation over 6km was about 120m. Better than nothing.

I am currently super excited about doing Section C of the Great Divide Trail this summer – booking National Parks was a horrific experience but I got the campsites I needed and am super pumped to venture out in August. But I know I need to get ready for this 11 day adventure.

So, I looked around to find out where I could go for an early season long hike – and I found one! The Boreal Trail is Saskatchewan’s “Long Trail” at over 120km in length. It runs the length of Meadow Lake Provincial Park from the eastern shore of Cold Lake all the way out to the Park office just north of Dorintosh.

What I have discovered though, is unlike many long trails with more reknown, the resources for planning this hike are not the most user-friendly. So I thought I would take a bash at introducing you, the internet to how to plan a multi-day adventure on the Boreal Trail. Once I hike it in a few weeks, I’ll certainly have something to say about the experience, so stay tuned!

Now, this isn’t the first time I’ve been out there. The end of December 2019 a friend and I decided to day-hike the first 20km of the trail from Cold Lake to Sandy Beach. It was a treat: good trail, groomed by snowmachines in most places (though the snow depth was only 4 inches or so), it was a supremely easy walk. We covered 20km (almost 12 miles) in a little over 4 hours. So, a good go for the short winter daylight hours this far north.

This sights were pretty – the Boreal Forest isn’t exactly rainforest, so lower your expectations, but it is real wildland, with Jack Pines, Spruce glades, Aspen groves, and the occasional Tamarack and Birch. The land is shaped by water – the park is actually a string of lakes west to east, connected by creeks and rivers. Originally glaciated, landforms range from bogs to sandy areas with very shallow soils, hilly ups and downs, and beautiful water views. Beavers are residents here, as they love to make new homes and new ponds, which often challenges trail-users, especially in high water years. After that experience, I knew I wanted to come back in the spring/summer!

So, what resources are there for you, if you want to plan a hike on this hidden gem? First, let’s start with a map. This one is zoomable and the most current I have been able to find. It has a bypass to an area rendered very wet by beaver work that by many accounts is preferable, if not quite as scenic. Here are a couple of other useful resources: this first was the original guide from the trail’s debut in 2011, and features topo maps. A more recent one, from 2017 I believe, features the same content but replacing the images with satellite imagery instead of topos. These are the best resources for information such as mileage between camping spots. If you’d like a GPX track, I found one here. Note: the trail is listed on the FKT site, but nobody has entered one yet! I should send mine in – it’s probably the only chance I’ll ever have at an FKT!

You can make reservations through Sask Parks, online or by phone but I don’t recommend the phone system as it goes to a call center in Oregon, which handles reservations for about 12 states’ park systems as well as Saskatchewan and they have little specific information on how to handle reservations for Meadow Lake.

NOTE: nightly reservations on trail used to be $11 for backcountry. It appears this has gone up to $18. There is also a $12 reservation fee online.

For distance between campgrounds, refer to one of the PDF guides above. The distances are a little tricky, as they are between major points not necessarily campgrounds, and require a little calculating. Also note: where the trails fork you have to be careful not to include sections you are not actually walking. Older maps show a trail through the Chalet on the east side of Matheson, but due to chronic flooding the latest maps I have seen route the trail up the west side of Matheson – there are no km distances written down for that route. I just ballparked.

In terms of planning your itinerary, the park just doesn’t have the challenging gain/loss that the mountains do. I am convinced that do do the trail in 7 days as they recommend you have to be really dawdling. I mean, 18km at 3kph is 6 hours, but I would lose my mind walking that slowly unless I was with my grandmother. With the long hours of summer facing us right now, and the sun cresting the horizon at 5:30am, and not down till 9pm, I don’t see why longer days of walking can’t be accomplished. I am personally planning a little over 4 days for the trip.

You will need a parking permit to leave your vehicle in the park, which can be picked up at any of the park offices. I have been told there is one in Pierceland as well as Dorintosh.

All the backcountry campsites have toilets, an elevated wood stove for cooking, and bear lockers. So don’t sweat Ursacks on this trail. Heck, you can even get away without a stove if the weather is fine and you can cook on a wood fire.

That’s all I have for now. Once I finish the hike, I’ll post a trip report. See you soon!